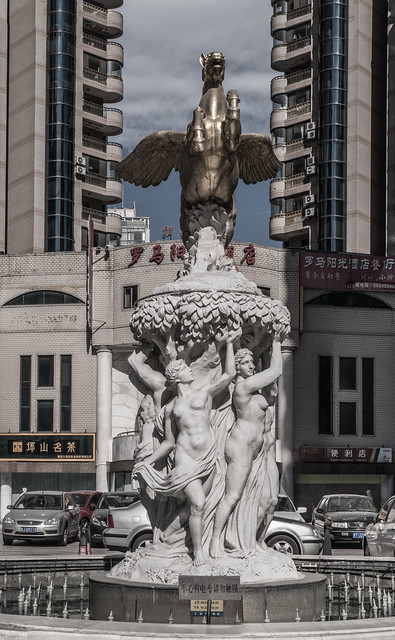 The Pegasus in the courtyard of my apartment complex. I took this shot last month, well before the skies were prettied-up for the APEC meeting. I’ve not done that much shooting during this period. I think that I’ve got a fair amount of photographs on clear days other than APEC blue ones, and I don’t want to cloud what I’ve been taking.

Also, the sky right now is eerie. I mean, it is nice and all, but something about it just doesn’t look/feel right.

This should’ve been a straightforward shot, but it wasn’t. I had Chong Chong on my waist seat while I was trying to capture the scene. I ended-up shooting four off-center pictures, which I stitched together using Photoshop. There was quite a lot of tweaking with Lightroom afterward as well… including the removal of a shadow from one of the hooves mid-center of the Pegasus on the statue below. Kudos to you if you don’t understand why this might be distracting.

Other tweaks include upping the contrast,clarity, and shadow settings, and decreasing the vibrance and saturation. 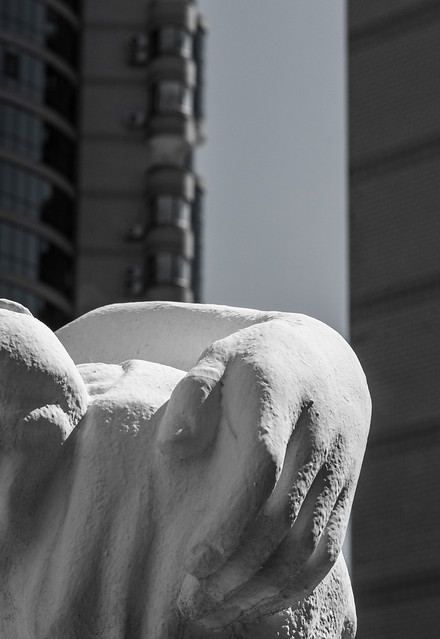 Ah, yes, Beijing’s Blue Skies are back. Of course, if you’re not actually living in China, you probably think that we’re perpetually smog bound. So it goes.

I took these three pictures from the roof of Tower E in the apartment complex. They were done using the Panorama mode on my Lumix DMC-GX7, with the camera mounted on an Oben CT-3510 tripod. Limited development was done using Adobe Photoshop Lightroom.

The first panorama is the smallest of the three, but looks best in the reduced format, so I started this blog post with it.

I strongly recommend that you click-on the bottom two shots, and look around the larger versions on flickr… click on the image once to goto flickr, then click on it again to enlarge the size.  (Yeah, the bottom one contains a bit of a “selfie”… about as clear of one you’ll ever get of me.) 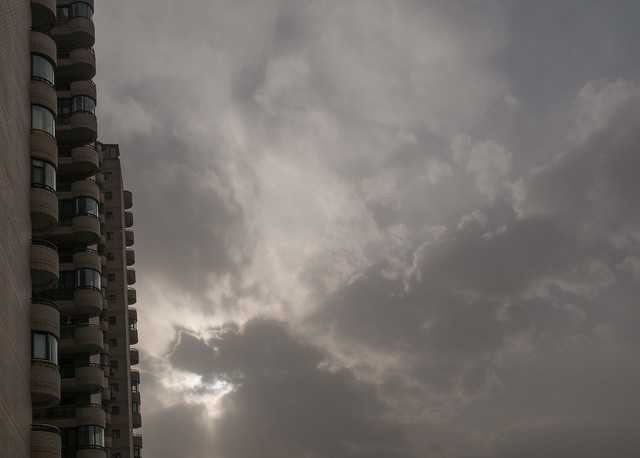 A sunset I shot toward the middle of last month at my apartment complex (Roman Gardens).

Took a fair bit of tuning using Lightroom to get it right.

Another picture of the snow on Friday. This time, from inside of our apartment complex, which is called the Roman Garden.

Photographed not far from our apartment complex.