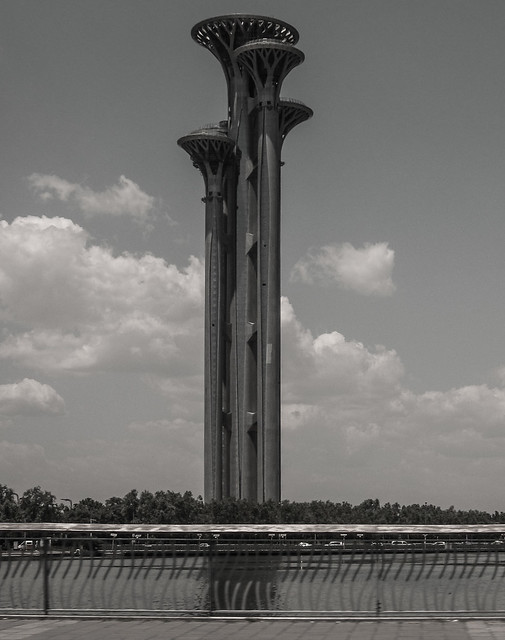 Beijing Olympic Park Observation Tower, which should be completed this year.

This is one of four pictures I snapped with my Canon IXUS 980IS from a moving car.

Processing, which included increasing clarity and greatly decreasing both Vibrance and Saturation, was done with Photoshop Lightroom 5.5. 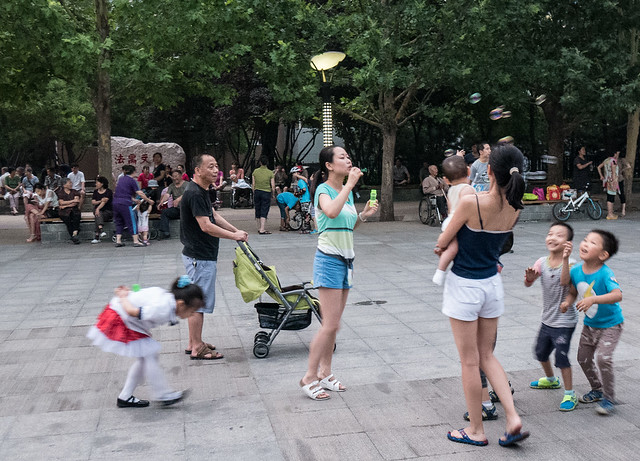 The girl with green block on her back is practicing her posture for inline skating. Yes, that is Shanshan holding Chong Chong.

Yet another image that I hope runs contrary to the “authoritarian government” label that is often used by Western media to described China. 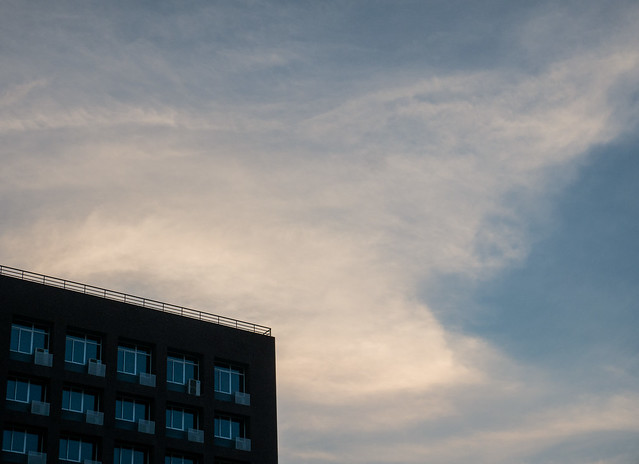 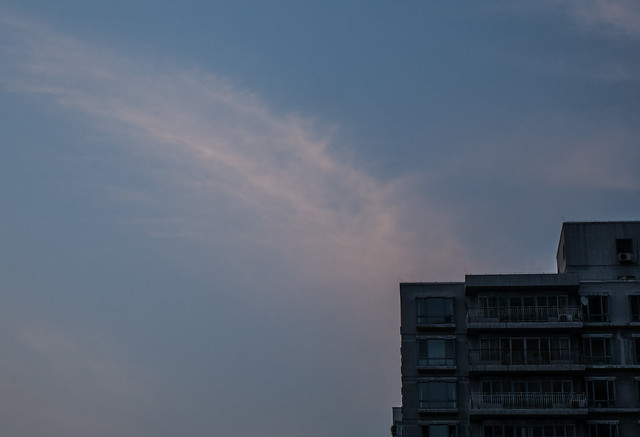 Yeah, I know, two pictures mean the title should be pluralized, but I just didn’t want to deal with it.

I’m kinda angry. We’ve had a month or so of fantastic summer weather… probably the best I’ve seen in the almost ten years or so I’ve been traveling to and living in Beijing, and I’ve not seen one mention of it in Western media.

Obviously, it hasn’t just been me posting pictures. Probably tens of millions of people in and around the Beijing area have posted pictures or mentioned the weather in hundreds of millions (or even billions) of posts on various social media platforms… the very same platforms that Western journalists so readily mine when they’ve got a negative story about Beijing (or China in general). 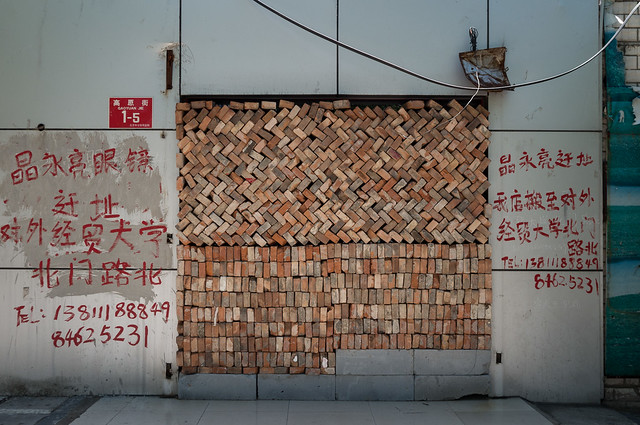 And, if you cannot afford to purchase them, you can always purchase used bricks.

This is a frame of a large restaurant which was recently closed. The restaurant will probably be leveled soon. 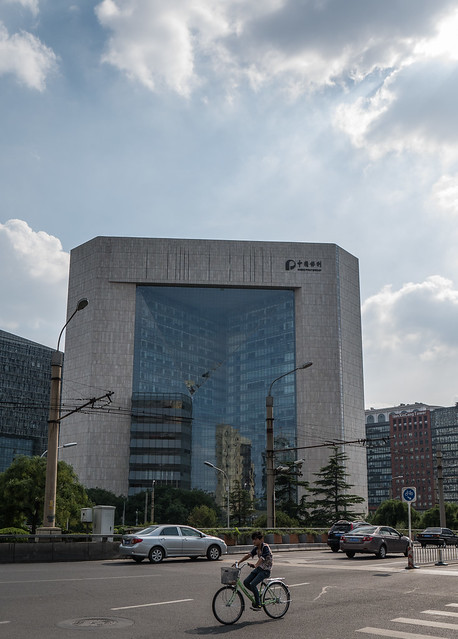 A bicyclist riding by the New Beijing Poly Plaza. 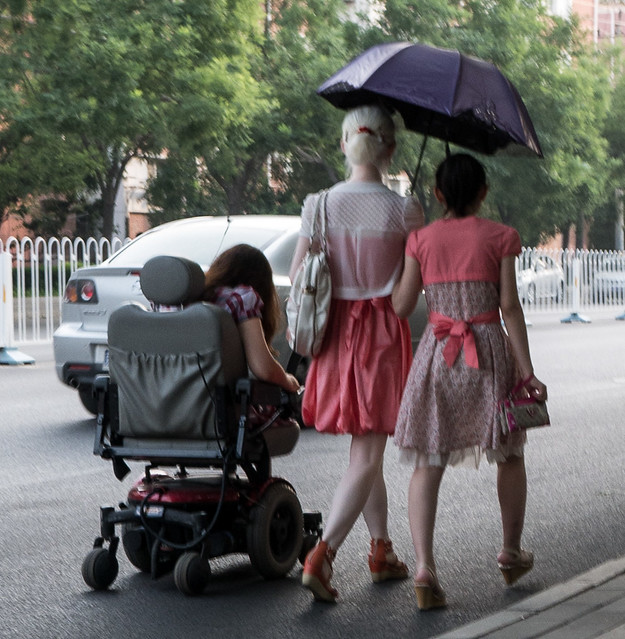 President Obama as a Chinese Warrior.

Again, the advertising campaign isn’t to:

It is meant to do one thing… help Homa sell refrigerators.

One thing that strikes me is I think that President Obama is more respected overseas than by people whom he was elected to represent.

In this advertisement, Homa Appliances is playing off of the similarity between the sound of the company’s name to that of the Chinese translation for Obama to sell refrigerators. And, as part of this campaign, they’re using an image which bears a striking resemblance to a poster designed by artist Shepard Fairey, which itself resembled an image taken by an AP freelance photographer Mannie Garcia.

Okay, putting aside the possibly copyright issues (and, this is a case which I would love to see goto court), think about what is happening here. A Chinese brand is trying to sell refrigerators in China by referencing the president of the United States. I can tell you that nothing like this happened under the Bush Administration (who, btw, wasn’t well liked here). I also cannot remember seeing any current leader from another country being held in such high esteem.

I think you’d have to go back to Lenin (before the fallout) to find anything similar.

And, this is even after being two and a half years into the administrations disastrous “pivot towards Asia”.

Now, if you think this is interesting, wait until tomorrow’s posting. 🙂 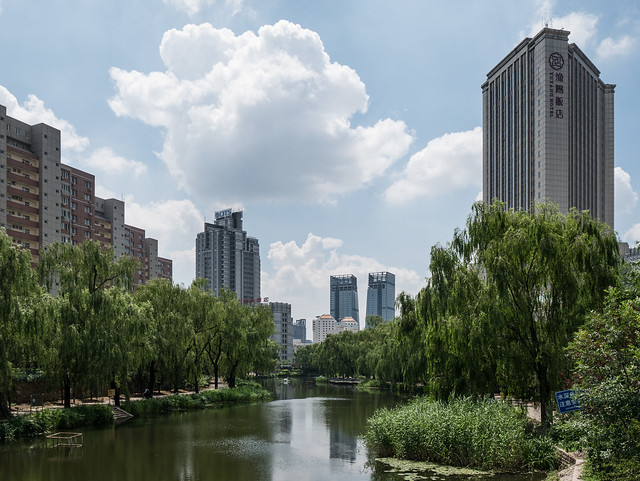 The Yu Yang Hotel is to the right of the frame. 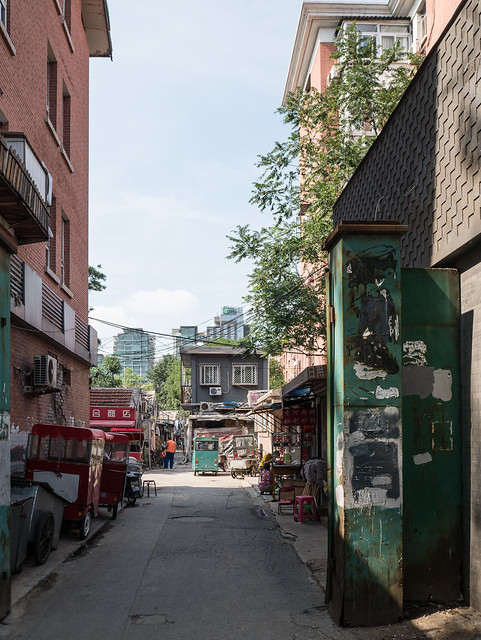 I was down in the Sanlitun area today, enjoying yet another beautiful summer day.

Truth be told, it is an area that I typically avoid, and probably wouldn’t goto at all except for an Apple store and two out-of-the-way restaurants.

The reason has to do with this paragraph  from the wiki article linked above:

The area has been under almost constant regeneration since the late 20th century as part of a city-wide project of economic regrowth. It currently houses many bars and clubs popular with both expatriates and locals as well as international brand-name stores such as American Apparel, Apple Inc. and Adidas.

Just not my thing. (Also, I’d qualify the use of “locals” a bit… that is, more young Chinese with money than typical Beijingren.)

In any event, as I was walking down one of those regenerated streets mentioned above, I looked down an alley and into this community of people that make the regrown parts of Beijing actually function.

Please do click-on the image and spend a bit of time exploring the larger version on flickr.